Dasai, a ritualistic dance is woven into the very fabric and noteworthy of the Adivasi Santal culture and traditions. Ancient in origin, it is almost losing its identity and its very existence is caught in the passage of time and the swing towards westernization.

On the day of Mahalaya, which also happens to be the first day of Navratras, tribal men would adorn brightly colored dhotis made out of saris, tie ghunghroos to their feet, wear a headgear of peacock feathers and go from village to village performing the Dasai dance, beating brass plates and playing the traditional musical instrument. Bhaung, which is made from gourd, layered with lac. The strings of the instrument are precisely strung to create the melody. They are also accompanied by the flute and kendri players. The charisma of Goddess Durga is described by the Dasai dancers through the lyrics they weave, in the stories of Kajol and Ayon.

The dance form raises the spirit of war to free the innocent and good from the clutches of evil. 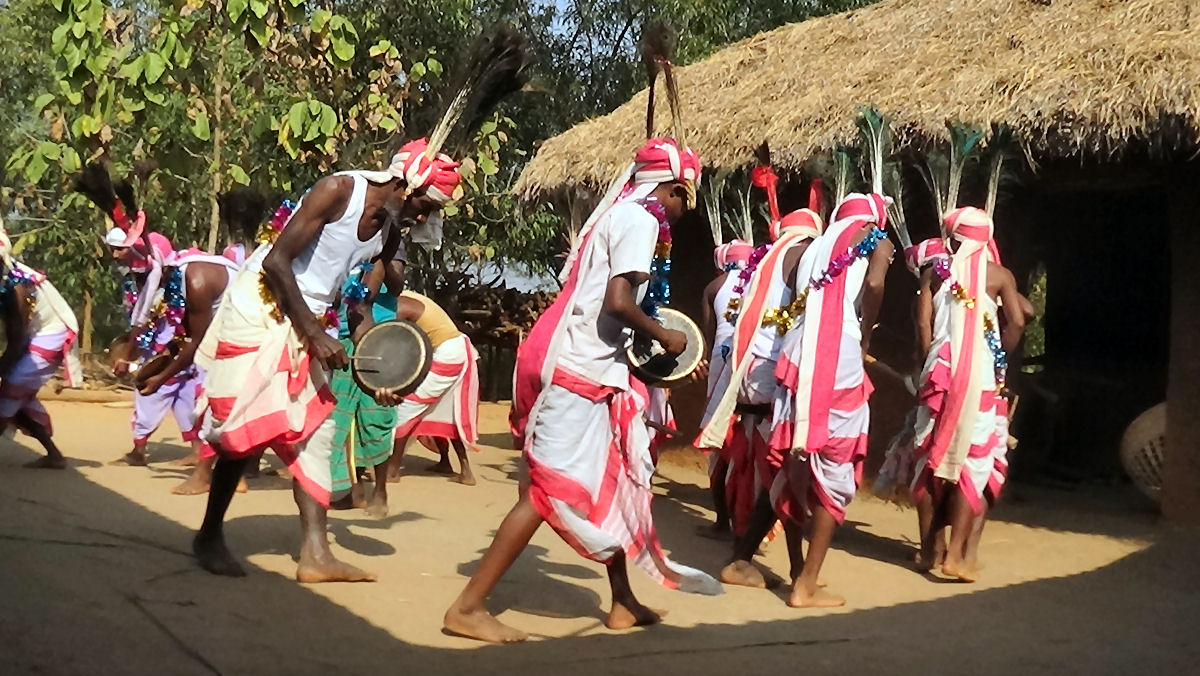 It is one of the oldest dances performed by the hunter community of Jharkhand. In the midst of the forest hunters perform a dance with brisk movements and loud resounding music, before they begin their hunt. After the dance performance the hunters go up a hillock and pray to the almighty for a successful and a safe hunt. This dance is performed in the Jesth ( May-June) months. 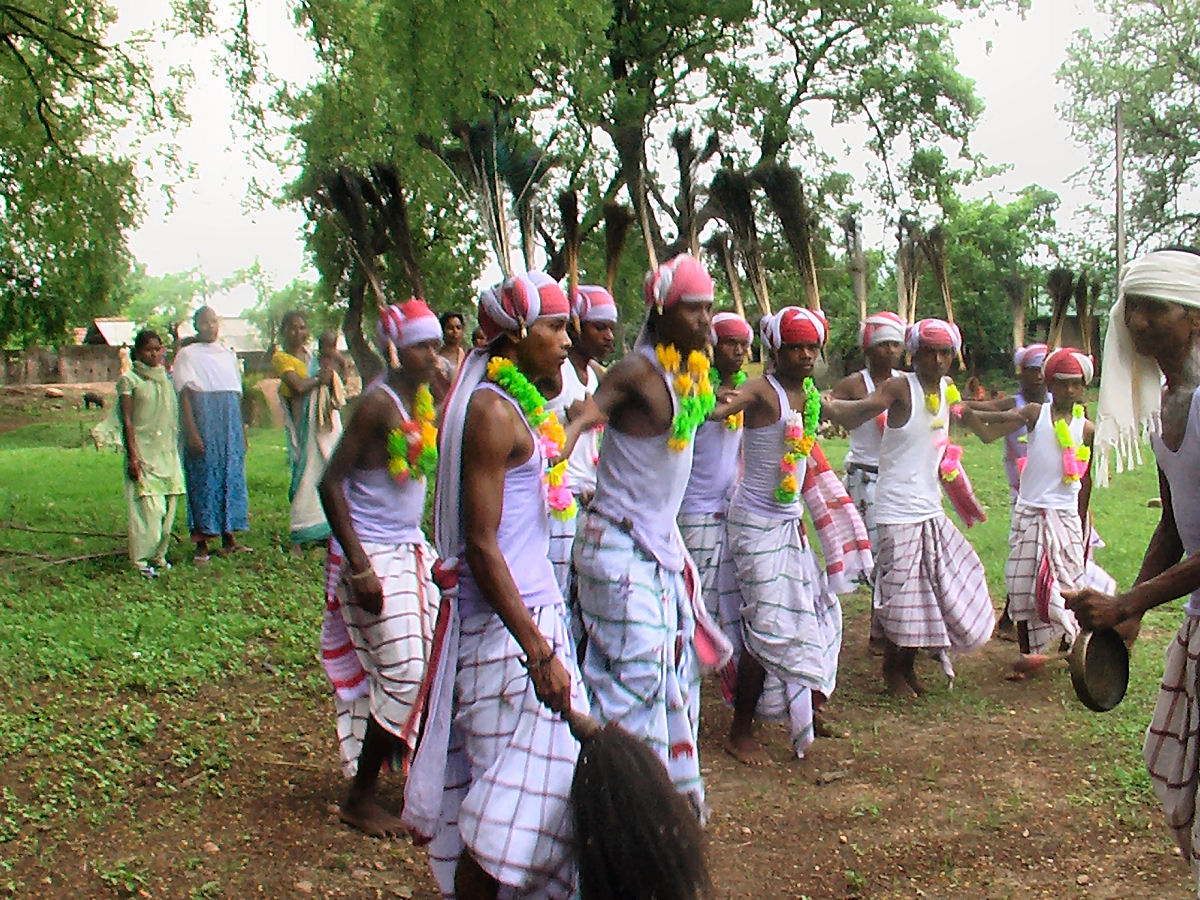 A martial form of dance, Firkal is performed on the day of Akhan Jatra, the day following Makar Sankranti in mid-January. The villagers first offer their prayers in animist form of worship supplemented by animal sacrifice. They pray to the Almighty for his blessings so that no dancer suffers from any form of injury while performing the dance. An ancient tradition, the villagers would worship their God before embarking upon hunting, which constituted their livelihood.

The dance portrayals are mostly enactments of hunting scenes and self-defense. Therefore, swords, arrows, shields and bows are used by the dancers. It is a male-dominated dance. Unfortunately, though due to lack of patronage, the invasion of city modernism and the pathetic socio-economic condition of the tribals, Firkal has become an endangered tribal art form. The remnants of this dance form may be found only in an obscure village Janumdih of Potka Block in East Singhbhum District in Jharkhand.

Like any other martial arts, Firkal evolved into a form of recreation among the Bhumij tribe. The passing years have introduced changes in the dance movements, but yet the essence of the dance has been preserved and so has the ethnic culture of the Bhumij. The modern form of Firkal reflects the courage and different phases of struggle in the daily lives of the Bhumij. Different taals or rhythmic rotations like Bagh taal, Birsa Munda taal and Pahalbani taal are in vogue to denote the courageous struggle experienced by the Bhumij community. 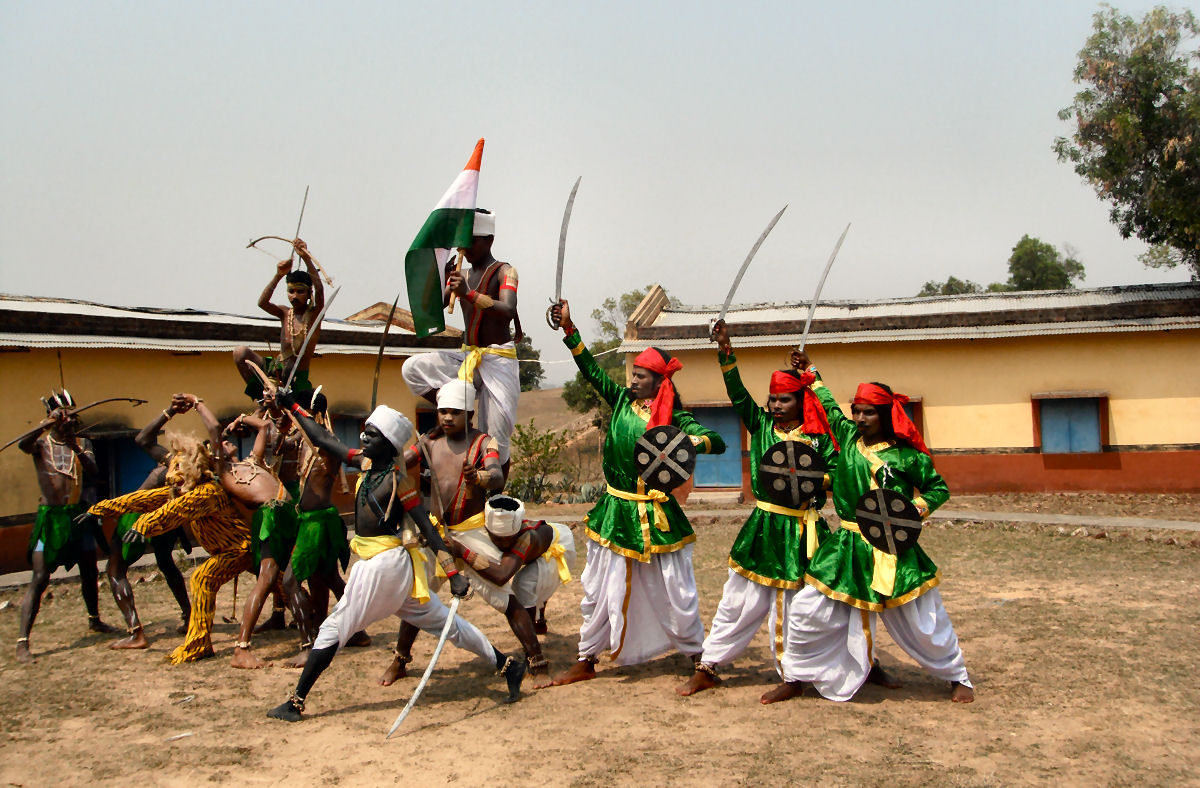 This traditional dance is practiced by the tribals in Jharkhand as a devotional message to the holy God of Fire. In Jharkhand, Kalash (Pither) is a symbol of religious beliefs and faith and consider to be auspicious. In this dance, the tribal women rejoice the harvest by carrying the grains along with a lighted lamps (Deepak) in this Kalash. They are welcoming the guests with prayers and offerings on this auspicious occasion.

It is one of the most popular dance performed by Santhals over the year. In evening time when they finished their work and come back to home they perform this dance to relax themselves. The word Langre means tire.

Through this dance they present their love for nature, life style, social problems, awareness among themselves, etc. 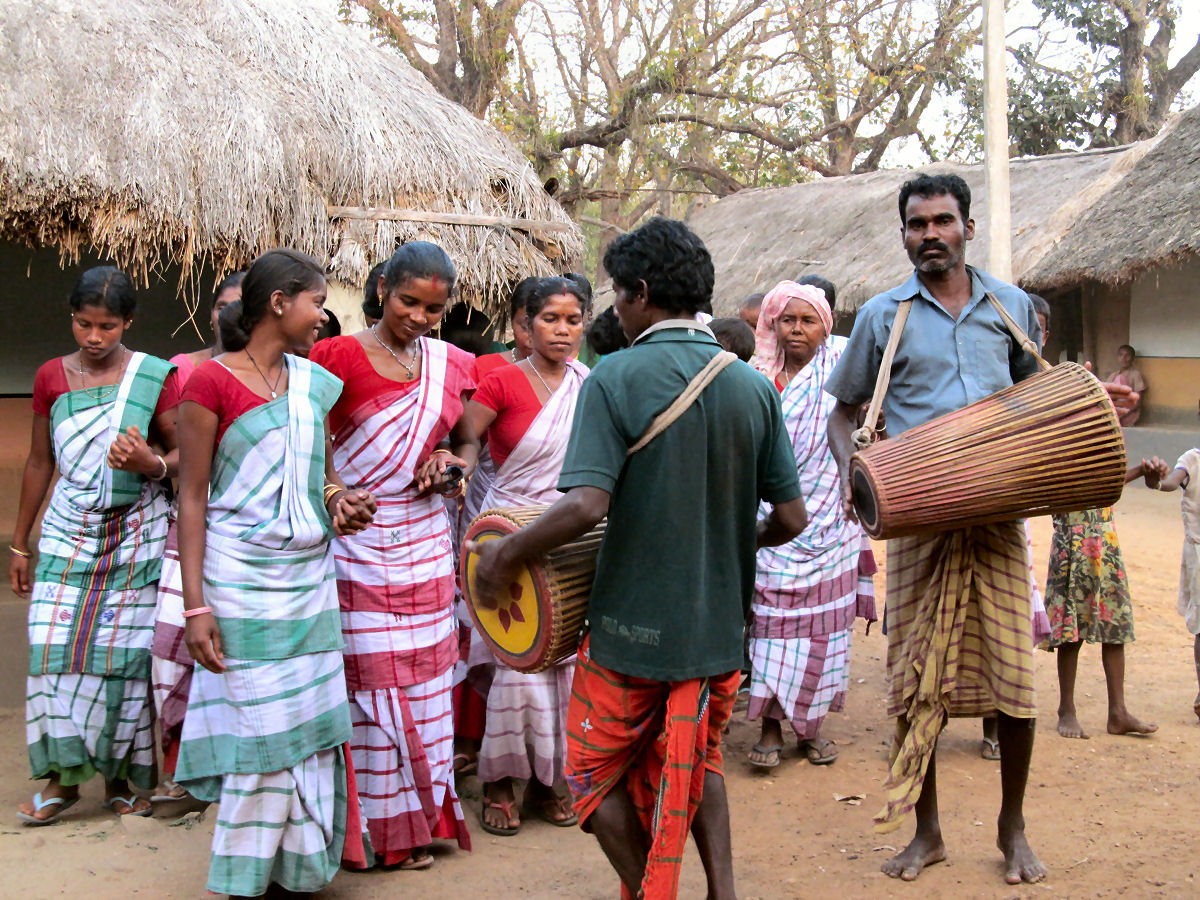 After a three day celebration during Magh Purnima (month of February), the whole village of Kolhan comes alive with music and dance. The Ho males of the village play the orchestra using traditional Musical Instruments like Mandar, Nagara and Dhol. The young girls dance gaily to the foot tapping beats produced in resonance.

In their lyrics they mean to coax other villagers to invite them to their village for such a celebration. Many of them start courtship after this festive dance. It is often a meeting program for match making. Dance rhythm is very fast and the girls dance for hours.

They dance in swaying movements, pause to narrate the lyrics and play instruments with great vigor. Their circular and crescent shaped movements liven the stage. Their forward and backward movements are so well synchronized that their formation remains uniform.

The women are clad in cotton saris with red/green borders that look so neat and crisp, complimenting the uniformity of their movements. Garlands of paper flowers or fresh flowers are worn. The men are dressed in uniformly designed Cotton Dhotis and Ganjis/ Kurtas.

Paata dance is performed by the Santal community of Jharkhand. The dance is done only for enjoyment, when villagers are free from all farm activities. It starts during Makar Sankranti and continues till the next farm activity has to begin. It signifies a period of relaxation with a festive mood. Both men and women rejoice to the beats of the Dhak, Mandar and Ghanta. They collect around the Akhara and continue dance for hours. The beauty of this dance is that the performers keep changing, but the dance never stops, as the passer byes keep joining in. This signifies how enticing and attractive it is.

The Munda community of Jharkhand performs the Paika Dance. It is a stylized representation of the rituals connected with the preparations of war. The dancers hold bows, arrows, spears, swords and shields and the dance is, in fact a stylized worship of arms. The martial character of the dance is retained by the use of shield and sword. The dancers display their skills in handling the sword and shield and the dance reaches a climax with the fast beat of the Madal.

Previously the dance was performed to welcome guests, but nowadays it is also performed on different happy occasions like weddings. The Dussehra celebrations remain incomplete without this dance. The musical accompaniments of this dance are Dhol, Nagara, Shehnai and Ranbheri. The Mundas originally came from North West India, but later moved to the Chota Nagpur Plateau. They began their settlements here by clearing forests. They were the first tribal people to resist colonization. The Paika Dance of the Mundas symbolizes the great war of their community against the British. Besides their protective chest blades, the dancers also wear colorful headgear and bells around their ankles. This captivating dance form, which is indigenous to the Mundas, is a martial art with variations throughout Jharkhand.

Rinjha is a community dance with distinctive male domination in an otherwise non-gender tribal community. It is performed in the Santhal villages of East Singhbhum, Dumka, and Santhal Pargana of Jharkhand. Based on a folklore, this tribal dance is performed on the full moon day of the Sawan Purnima in July –August during the Gomha festival, with much fervour and fanfare.

The myth behind the festival started with the tale of an old woman who had two sons, Karam and Dharam living in poverty. They moved from door to door, begging for their livelihood. A day arose when all Dharam's efforts at begging proved futile. Tired and disappointed, he fell off to sleep under a tree. In his dream, Goddess Lakshmi appeared and advised him to graze a cow in the field, and as he did that, he should play the flute. Following the advice he began to act accordingly.

As Dharam awoke, on remembering his dream he went in search of a cow and a flute. The two brothers then started to graze the cow, instead of begging; and as they did this, they performed a dance, the Rinjha, in praise of Goddess Lakshmi, who had enlightened Dharam that there was prosperity and happiness. Karam dressed as a woman while Dharam performed the role of a man to make a couple. With the blessings of the deity, they soon attained prosperity. The folk tale behind Rinjha can be understood as a slow transition from Jungle Life to agrarian civilization.

The Sarhul dance is performed by the Oraon and Munda communities. On a similar occasion the Baha dance is the most sacred dance of the tribal, especially the Santhals in Jharkhand The whole community get together to dance rejoicing around the Sal tree all through the day and night for three days. The dance is performed on the blossoming of the Sal tree (the life line of Baha Festival). The first flowers of the season from the Sal tree are offered to the village tutelary deities, along with rice and meat.

It bears certain similarities to the ancient flower festival celebrated by the Buddhists. The first day their lyrics relate to the cleaning and washing of the house, on the second day they dance to the praise of Gods and Goddesses. On the third day the lyrics relate to rejoicing after the hunt. In the Sarhul men wear peacock feathers at the back of their waist and women decorate their buns with white feathers or white Sal flowers. In the Baha only the women dance. They too dress their hair with white Sal flowers. Dancers from neighboring villages are also invited. The heart throbs with joy at the fast pounding rhythmic beats, created by musical instruments, such as, Nagara, Jhanj, and Chatkola to perform Sarhul; and Mandar, Kendri, Bansuri and Nagara to perform Baha.

The white flowers of the sacred Sal tree add to the splendor of the dance. The dance is a significant part of the merriment, which reflects love and brotherhood in the community. Dahar and Langre steps are performed in the dance. It is performed in front of the Jaer Sthan, with loud resonating beats. Women perform the Dahar steps, men present the Bahadon and both conclude the dance with Langre, that is ultimately performed in the Akhara.

Sarpha is performed in all gaiety by the Santhal women. It is performed during Sohrai coinciding with Kali Puja, but with a difference. The community worship Kapila the cow, performing the slow, yet fleeting movements.

The instruments used to produce background effect in the dance are Mandar, Nagara, Tamak, Ghanti and Dhak. The women sing the Chumavara geet and the males sing songs with lyrics to awaken the cow. Even Langre sangeet is sung during the performance.

They are dressed in symmetrical bordered saris, over which they use dressy ornaments, to add magnificence, color and beauty to the dance. The other accessories they use are, a Kansa Thala and Katori in hand; a wooden Sarpha and a pot on their head. The pot is precisely balanced on the head through their sprightly yet delicate movements. The lyrics generally relate the present day situations, that are ever changing. It is a dance form that grows by the day. The men play the accompaniments, like the Kendri, Shehnai and Sarjun to create an appealing resonance. 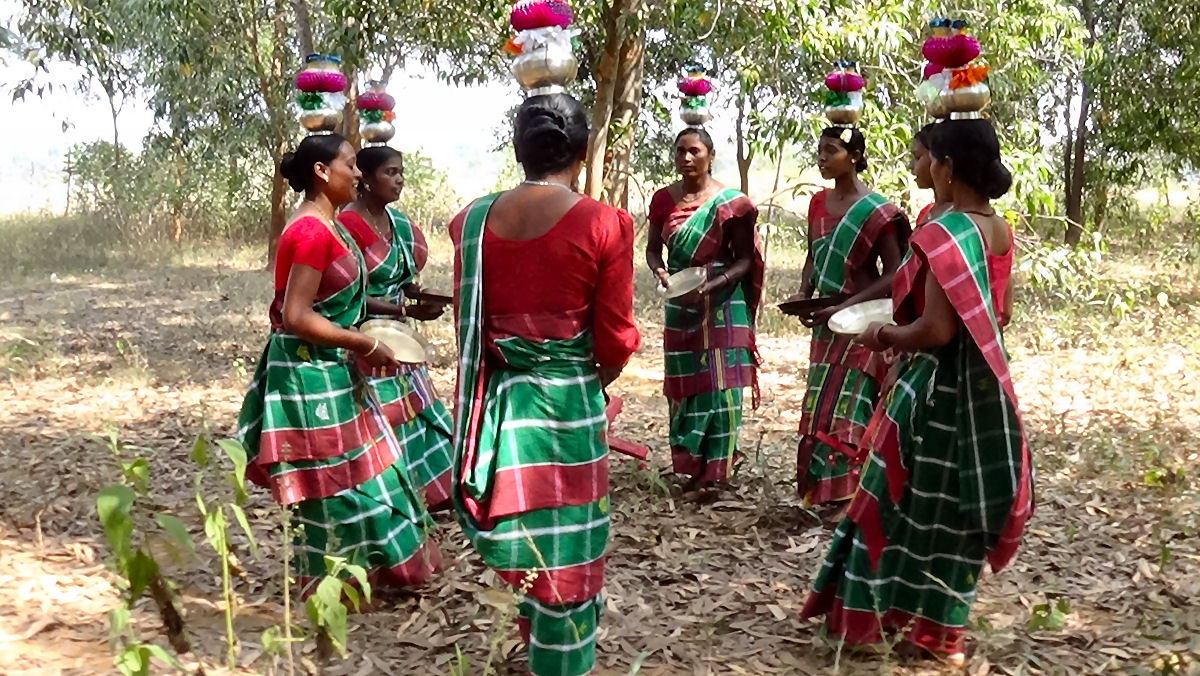